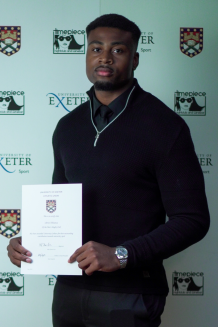 Christ's contribution to University sport was recognised by the awarding of a colour in the recent colours and awards ceremony.

Second year BSc Exercise and Sport Sciences student and rugby scholar, Christ Tshiunza has enjoyed a significant amount of success in his rugby career this year.

Having made his University rugby debut at the start of the academic year, he then swiftly made his debut for Exeter Chiefs playing multiple matches for them in the Autumn and thanks to a strong performance was then signed to play internationally, representing Wales in the Autumn Internationals, winning against Fiji and Australia, making him the first ever BUCS Super Rugby player to play for a Tier 1 nation and his university in the same season.

Born in Kinshasa, Democratic Republic of Congo in 2002 when the country was gripped by a second national war, his family moved to Wales in 2010. Initially with no English, transition to UK life was difficult. However, he soon flourished as a budding athlete before discovering the joys of rugby at Rhiwbina RFC and then Cardiff Blues Academy. With an ambition to come to the University of Exeter to study Sport Sciences he signed with the Exeter Chief’s and thanks to being supported by both the University and the club, Christ is able to excel both academically and on the pitch.

Christ contribution to University sport was recognised by the awarding of a colour in the recent colours and awards ceremony (pictured).

Christ receives support through our high-performance sports scholarship programme thanks to donations from alumnus Phil Drury (BA Politics 1994) and his wife Megan. The performance programme supports over 300 students with over 60 receiving financial support in the form of a Sports Scholarship or Bursary, as well as tailored one to one lifestyle support and mentoring. Thanks to donations received from alumni and friends we are able to ensure more students can benefit from the programme and offer specialist services such as sports psychologists, nutritionists, physiotherapists and strength and conditioning training as well as advice on balancing their athletic development alongside academic study - ensuring they can excel in both areas.