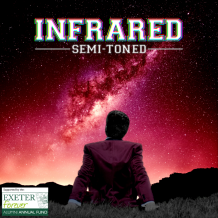 Infrared - the new EP from Semi-Toned.

Thousands of alumni and supporters of the University of Exeter help current students through generous donations to the Alumni Annual Fund, by giving gifts of time or money in order to enhance the student experience.

The Alumni Annual Fund supports projects that demonstrate that they will enhance the experience across the wider student community, benefitting current and future generations and making Exeter an even better place to live and study.

A wide range of projects are supported by the Alumni Annual Fund every year which includes students societies such as  the University of Exeter’s award-winning, all-male a cappella group ‘Semi-Toned’ who in the 2020-21 round received funding to support the recording and release of their new EP which is titled ‘Infrared’ and was produced by Liquid 5th Productions.

Semi-Toned have quite the credentials: winners of ‘The Choir’ on BBC2, national champions of the Voice Festival UK and a record of sell-out 5* shows at the Edinburgh Fringe Festival. Over the last few years they have released music videos, recorded albums and toured both nationally and internationally in front of thousands of people.

Given that the live entertainment industry has ground to a halt due to the pandemic, this EP has been Semi-Toned’s only opportunity to share their music with their worldwide audience. The six high-quality arrangements, with songs from artists including David Bowie, Shawn Mendes and Hozier, have been listened to by all ages. The press coverage for the release includes an interview on a BBC radio station and an interview on the international a cappella radio station Acaville Radio, based in the USA.

Oliver Hopkins, President of Semi-Toned, said that the group was incredibly grateful for the support of the Alumni Annual Fund in enabling the recording and production to take place and that he hopes the project will build their following as well as the profile of the University of Exeter both locally and internationally.

He said: “Making an EP of professionally recorded songs will demonstrate to other students at the University of Exeter, as well as prospective ones, that the University is filled with opportunities for ambitious and impressive projects, such as this one. We hope that many students will enjoy listening to the EP and be proud that it has been created by their fellow students. The 14 students directly involved in the making of the EP have also developed key transferrable skills, such as communication and time management, which will be invaluable in employment. This is particularly the case for those who took responsibility for organising the project.

“Our EP has been a means through which the local community can connect to the student body, as a project that represents what students here are able to achieve. Being available to listen to for free, our EP is accessible to all to listen to as much as they want. Furthermore, since our name is intrinsically linked with Exeter, we hope we have made members of the local community proud. As our name spreads and more people hear our music, the association with Exeter will also grow.

“With this EP, we are continuing to represent Exeter on an international scale. Although we will be unable to perform in-person abroad in the coming months (like we have done in previous years in America), this EP will be instrumental in continuing to build our international following. While we have been on tour, we have actually heard first-hand accounts of how high school students saw our shows and subsequently applied to study at the University of Exeter. On a national scale, along with the myriad of different gigs that we perform at throughout the year, in August 2021 we are planning to perform at the Edinburgh Fringe Festival to thousands of people. As always, there will be a strong association with our group’s name and Exeter. At gigs such as this, we plan to sell CDs of our new EP and encourage audience members to stream our music online.”

In addition to this, the experience of participating in the creation of the EP has also been a highly beneficial one for the students who participated in the project as can be seen by the feedback they provided on the project:

“It was lovely to have something to remember the work we had done throughout my first year of uni. Recording an album was something I had never even thought I would do in my life, so it was an amazing experience.”

“This was my second time recording with Semi-Toned, however in spite of it not being my first time I found that there was still something exciting about getting into the studio each morning and watching the EP being built up, especially since I’d been working on the organisation elements of the album for a while. Hearing the other guys’ reactions to the first mix was great as well, as it was most people’s first time recording and they’d only heard their own parts. I think that the end product is something we can be really proud of, especially in a year where so many plans couldn’t go ahead, so getting the album out and at the quality I feel it is, has felt like a great achievement.”

“Being a part of producing this EP has certainly been the highlight of Exeter so far! It has been such an exciting project to be a part of. It’s been gutting that we haven’t been able to perform in so long, but being able to share this music with my friends at uni and my friends and family back home has been fantastic!”

You can listen to Infrared online by downloading or streaming via Spotify (where it has had more than 7,000 streams since release), YouTube, and Apple Music, as well as keep up to date with Semi-Toned via their social media: Facebook, Twitter and Instagram. 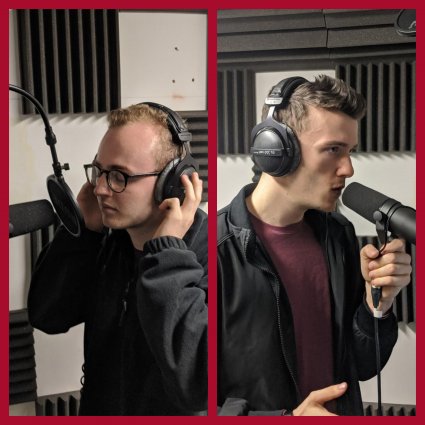 Pictured: The album being recorded