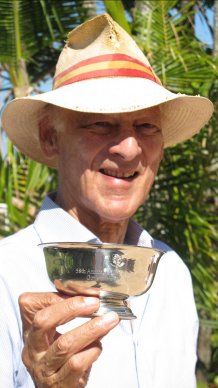 Excellence in cricket at the University of Exeter has been boosted further with the generosity of Sir Christopher Ondaatje CBE (Hon DLitt, 2003).

Sir Christopher has donated £100,000 to the Making the Exceptional Happen Campaign which will enable the University to enhance further its student and community cricket programmes.

The gift will be used to support the development of talented male and female cricketers, increase participation from children and adults in the local community through schools and cricket clubs, and encourage regular physical activity in demographics with traditionally lower participation rates.

Much of the University’s cricket activity is delivered at The Sir Christopher Ondaatje Devon Cricket Centre, a specialist four-lane indoor facility on the University’s Streatham Campus, opened in 2009 thanks to the generosity of Sir Christopher, the England and Wales Cricket Board (ECB) and the Lord’s Taverners.  As well as providing an excellent environment for elite-level training, the Centre is used by thousands of children from across the South West each year for beginners’ lessons and school holiday courses. The Centre also hosts a variety of disability sport activity, including the finals of the South West Table Cricket Championships earlier this year.

Cricket is one of nine focus sports at the University and there is a proud tradition of supporting the development of talented cricketers. The University of Exeter has developed an especially strong relationship with Somerset County Cricket Club in recent years, a club also supported by Sir Christopher. Somerset compete in the top tier of English cricket competition, captained by Exeter alumnus Tom Abell (Flexible Combined Honours, 2015).

In partnership with Somerset and Gloucestershire County Cricket Clubs, the University of Exeter has hosted the Western Storm team for each of the first two years of the ECB’s Kia Women’s Cricket Super League. This year’s Western Storm squad featured a number of World Cup winning England internationals, former World Player of the Year and West Indian captain Stefanie Taylor, as well as three recent Exeter graduates in Freya Davies, Amara Carr, and Lissy Macleod. The team enjoyed an exceptional season and were crowned 2017 Super League Champions last month.

Sir Christopher said: “I am extremely proud to extend my association with the University of Exeter, and to support two of my great passions – education and cricket. It has been extremely gratifying to witness the success of the Devon Cricket Centre over the last decade and I hope my latest gift will extend opportunities for young people from all backgrounds to experience the sport.”

Alison Davidson, the University’s Director of Sport, commented: “We extend our sincere thanks to Sir Christopher for his ongoing support. We offer cricket opportunities to a wide demographic of students and non-students alike and we look forward to continuing to encourage participation at all levels of the game. Sir Christopher’s gift will enable the University to build on our existing successes in cricket and have even greater impact.”

Sir Christopher’s recent support for cricket comes within weeks of the announcement that the University’s largest ever philanthropic Campaign has exceeded 50% of the £60 million fundraising target, with over £30 million donated by alumni and supporters to date.

Director of Global Advancement, Dr Shaun Curtis said: “Sir Christopher Ondaatje has been a tremendous benefactor of sport in Exeter and the South West of England.  On behalf of the University I would like to express my appreciation to him for his continued vision, support and generosity.”